“How are things going?” is a common conversation starter and “Things are looking up” or “We’re getting busy” have been common responses over the past year in the Williston Basin. That optimism has been substantiated by the latest data releases from state and federal regulators and agencies.

A deeper dive into State GDP by industry shows that Mining, including the oil and gas industry, attributed for the lion’s share of growth since the beginning of 2016. Mining grew from $4.4B in the first quarter of 2016, to $7.5B in the third quarter of 2017, a 75.5% increase in less than two years and once again leads the state. 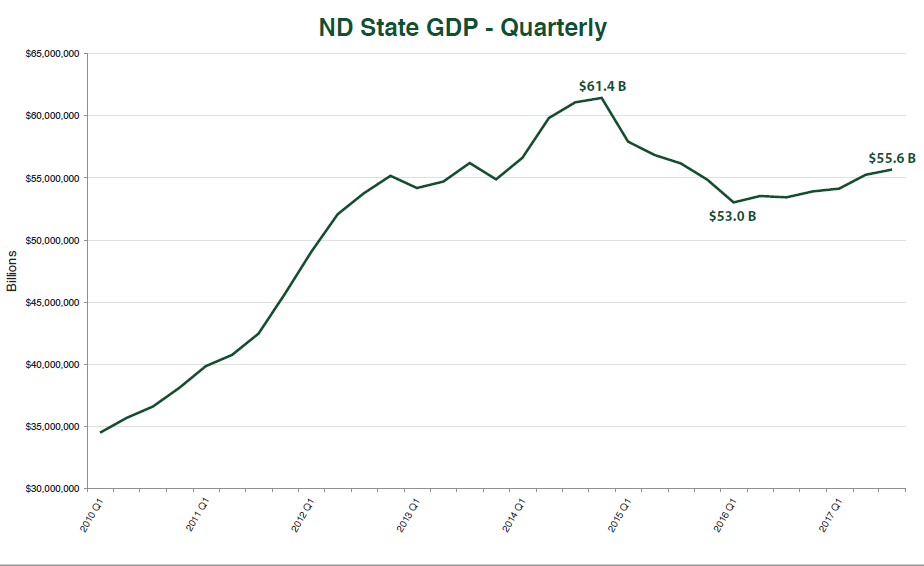 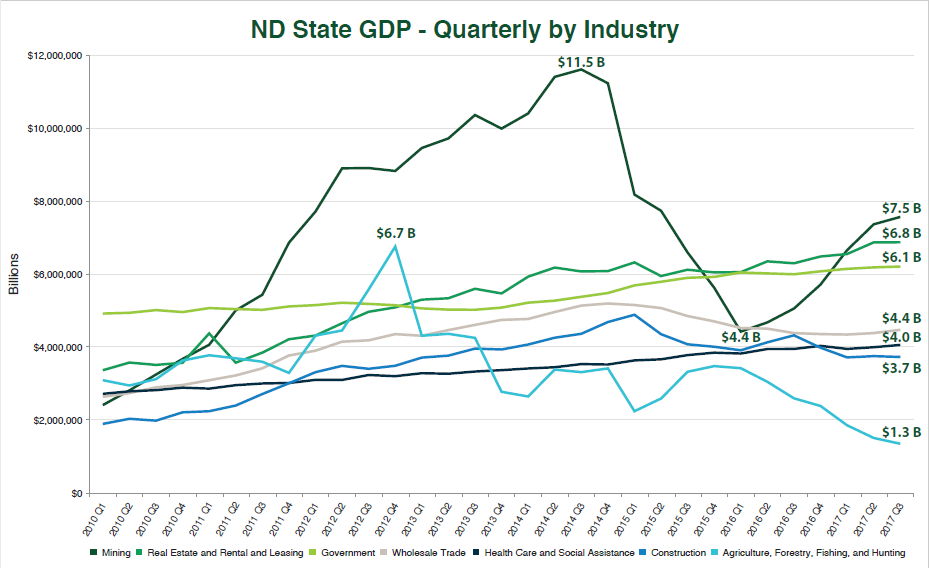 Another key indicator of the economic activity that people are feeling in western North Dakota is Taxable Sales and Purchases - Quarterly. The measure in Williams County peeked at an incredible and unsustainable $1.2B in the fourth quarter of 2014 before dropping precipitously throughout 2015 and reaching a bottom at $270M in the second quarter of 2016.

Taxable activity stabilized in Williams County throughout 2016 and showed significant growth through the first three quarters of 2017 at $282M, $364M and $388M for a growth rate of 37.6% during that time. 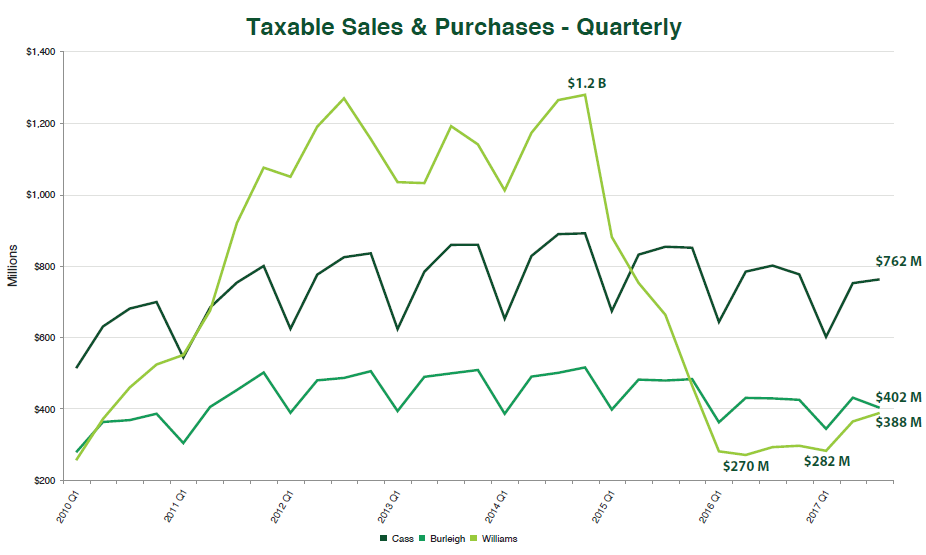 The chart on Monthly Employment shows the employment numbers for four of the key employment centers in western North Dakota from 2010 through the second quarter of 2017, the latest data available. Employment indicates a similar trend with declines bottoming out by the end of 2016 and growth taking hold in 2017. 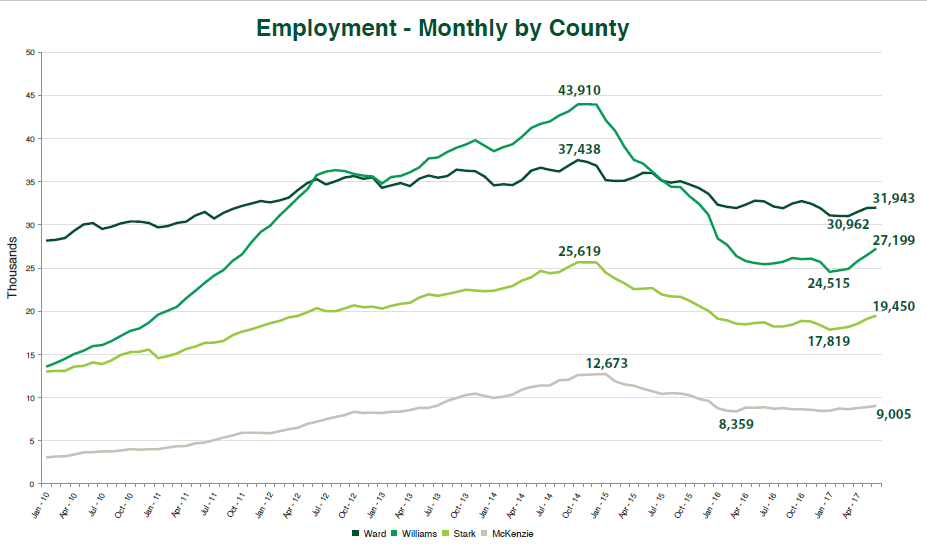 It is well understood that the economy in western North Dakota and the preceding indicators are driven by oil exploration and production activity in the Williston Basin. What may be surprising to some is the rate of growth in daily oil production in North Dakota during 2017.

After setting an all-time high in December 2014 at 1.228M barrels of oil per day (bopd), production dropped to the most recent low of 942K bopd in December 2016. Since then, production has been on a fairly steady and somewhat surprising growth run to 1.194M bopd in November 2017.

The 252k bopd increase represents a 26.8% rate of growth in eleven months and only 34,053 bopd less than the all-time record high for oil production in North Dakota. Lynn Helms, Director of the Oil and Gas Division of the North Dakota Department of Mineral Resources, expects the state to surpass that record in the first half of 2018. 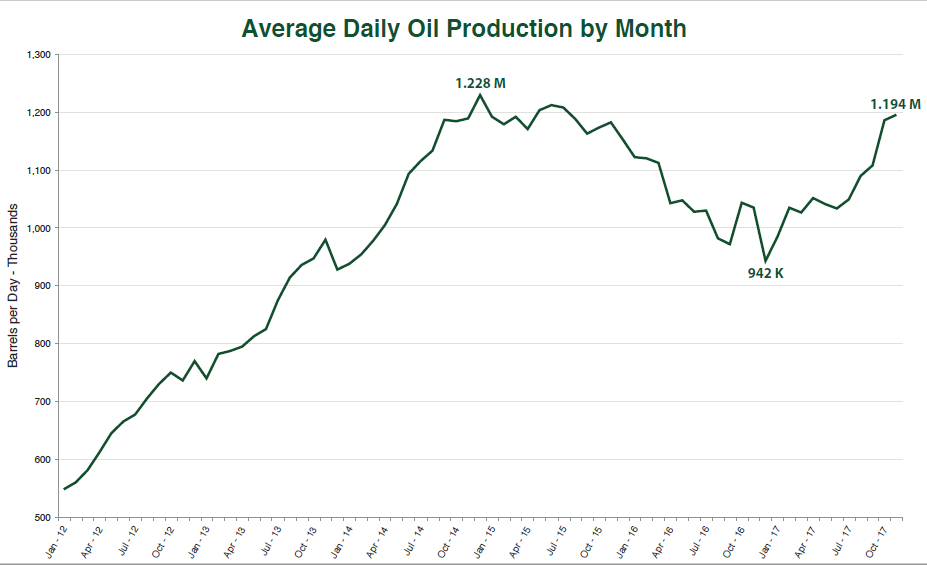 The production activity is driven by the price of oil and West Texas Intermediate (WTI) is a benchmark used to analyze the market. In 2014, the price hovered around $105 for much of the year until OPEC signaled a change in direction.

After they announced a policy to not withhold production in favor of protecting their market share over propping up price, WTI fell to $44.08 by the end of January 2015. The price fluctuated between $38 and $61 through the first three quarters of 2015 as the market adjusted and struggled to adapt to OPEC’s new policy.

In November 2015, OPEC affirmed their policy on the heels of the Iran nuclear deal. The deal lifted sanctions on Iran that enabled the country to bring around 3 million bopd into global markets. WTI price dropped from $47.88 in November 2015 to $26.19 in January 2016.

As 2016 progressed, rumors and conjecture signaled that OPEC was going to change policy to reduce supply and support increasing prices. By June 2016, WTI was trading over $50/bbl. In September 2016, OPEC officially announced an agreement to cut production in an arrangement that also included non-OPEC producers such as Russia.

Price fluctuated between $39 and $55 through the majority of 2017. There was a pull back by June as doubts grew over compliance from the cartel and increased US shale production. Since then, price has trended mostly higher as US crude storage has continued to decline from a high of 535M bbls in March 2017 to 411M bbls on January 19, 2018 after ten straight weeks of declines. That has led to WTI futures trading over $66/bbl for the first time since December 2014. 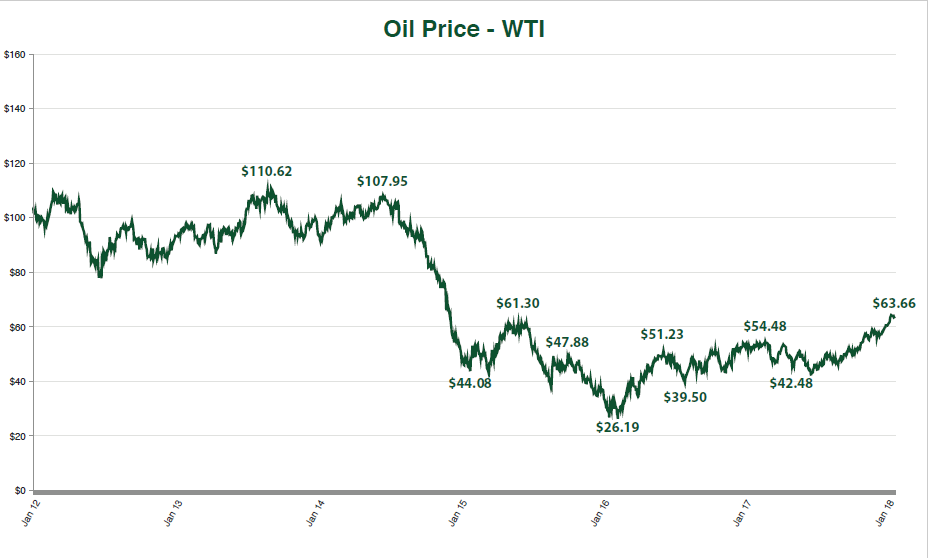 The mood around Williston continues to be positive and people expect 2018 to be a continued recovery and economic growth. The economic indicators seem to support the continued optimism.

Back to Blog   Top

What is Business Bitz?